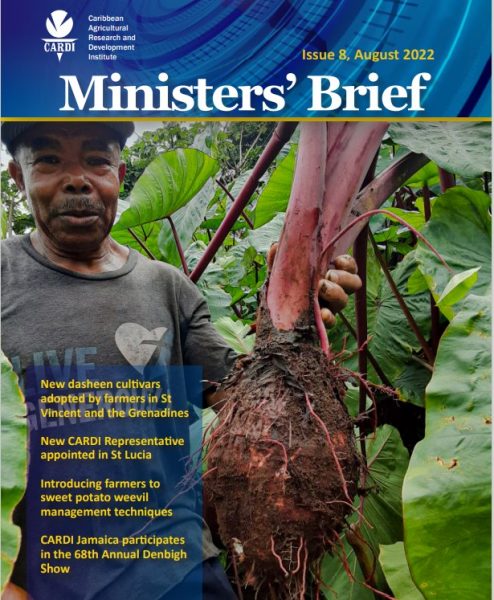 New dasheen cultivars adopted by farmers in St. Vincent and the Grenadines

Two dasheen cultivars introduced by the Caribbean Agricultural Research and Development Institute (CARDI), are being widely adopted by farmers in St Vincent and the Grenadines, because of their superior agronomic characteristics. A recent study conducted by the Ministry of Agriculture, Forestry, Fisheries, Rural Transformation, Industry and Labour revealed that farmers in Agricultural Region 2, were opting to grow the introduced, Samoa (green petiole) and IND 512 (red petiole) varieties over the traditional ones.

The findings of the survey revealed that both varieties are highly adaptable to the region’s climatic and soil conditions. Additionally, farmers reported that the yields were higher than those obtained from traditional varieties. Both varieties were also found to be less susceptible to pests, and diseases such as aphid, mealy bug, mould and phytophthora. Tubers were also found to be less starchy, and as a result the cooking times were significantly lessened. In terms of propagation, farmers reported that it was easier, to remove suckers without causing damage to the mother plants.

Both the Samoa and IND 512 were among 25 cultivars, evaluated on farms and on station, in St Vincent and the Grenadines between 2010 and 2014. They were part of the fifty cultivars initially obtained from the Secretariat of the Pacific Community (SPC) and Centre for Pacific Crops and Trees (CePaCT), under the European Union supported, International Network for Edible Aroids (INEA) project – Adapting clonally propagated crops to climatic and commercial change. The project’s objectives were to broaden the narrow genetic base of taro (dasheen), a major export crop, so that it can adapt to the changing climatic conditions and select varieties that have outstanding agronomic, yield and nutritional potential.

INEA is a consortium of scientists and growers from all over the world who are using edible aroids (taros), as a model to improve clonally propagated crops of the tropics. CARDI was one of the research organisations in this network and conducted the taro evaluations in St Vincent and St Lucia. 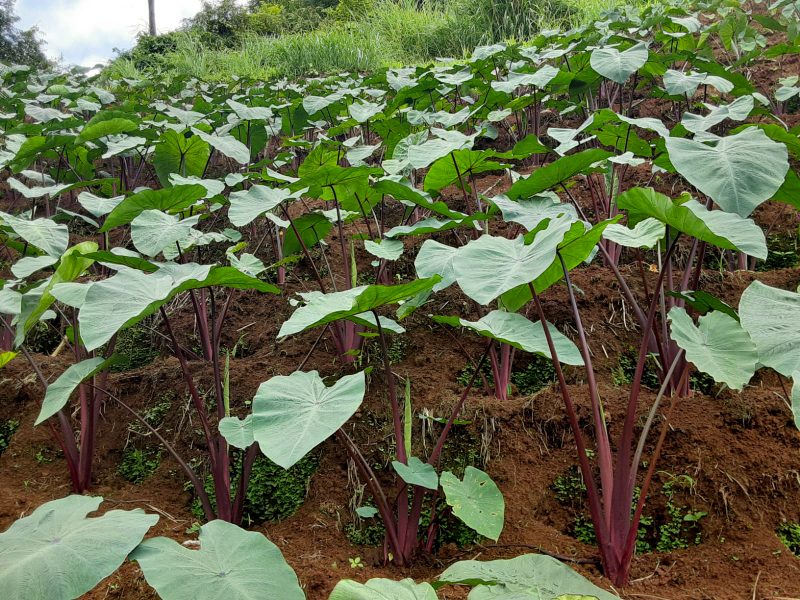 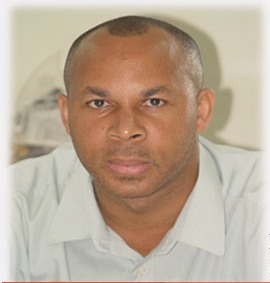 The Caribbean Agricultural Research and Development Institute (CARDI), is pleased to announce the appointment of Mr. Barry Innocent, as its new Country Representative in St Lucia.

A true agriculturalist, Mr. Innocent has more than 35 years working in agriculture and rural development at the national, regional and international levels. Mr. Innocent comes from the Ministry of Agriculture, Fisheries, Food Security and Rural Development, where he served as the Deputy Director of Agriculture Services. Prior to that he held positions at the Windward Islands Banana Growers Association Research Division (WINBAN), and at the Caribbean Farmers Network (CaFAN). Mr. Innocent has also volunteered for anti-poverty work with the All Together in Dignity to Overcome Poverty Fourth World, in London.

Partnerships are central to the work of the institute. As the CARDI Representative, Mr. Innocent will work in collaboration with strategic partners, including the Ministry of Agriculture, Fisheries, Food Security and Rural Development, to implement the Institute’s programme of work. Presently, in St. Lucia, there is a strong focus on the development of the coconut and roots and tubers industries, training and capacity building and development of several fruits and vegetable value chains.

Mr. Innocent has a Master of Arts in Rural Social Development, from the University of Reading, England. He also holds a Post Graduate Diploma, in Agricultural Extension, from the University of the West Indies, St Augustine Campus and a Diploma in the Practice & Science of Agriculture, from the Eastern Caribbean Institute of Agriculture & Forestry (E.C.I.A.F.), Trinidad and Tobago. He also has specializations in psychosocial aspects of agricultural and rural development, and has a passion for agricultural innovation and research.

Mr. Innocent’s experience and expertise in the field of agriculture, and rural development will be an asset for the implementation and expansion of CARDI’s footprint in St Lucia and regionally.

The management and staff warmly welcomes Mr. Innocent to the CARDI team. 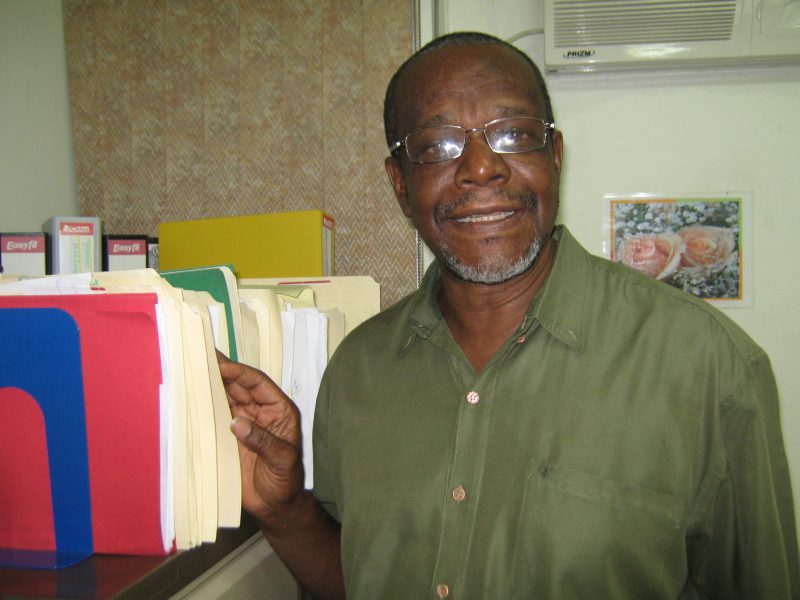 Dr. Leslie Anthony Simpson fondly referred to as Leggy, served the Caribbean Agricultural Research and Development Institute with distinction for 19 years, as a CARDI Representative, Soil Scientist and Natural Resource Management Specialist. It was with heavy hearts we learnt of the passing of Dr. Leslie Simpson on 6th August 2022, one day shy of his 73rd birthday.

Born in Guyana, Dr. Simpson pursued studies in Agriculture Science at the University of the West Indies, St Augustine where he obtained his Bachelors, Masters and Doctor of Philosophy degrees.

His first stint at CARDI was from 1978-1979 as an Agronomist in Guyana. In 1997, he joined the Institute as a Soil Scientist and Team Leader for the Intermediate Savannahs Agricultural Research and Development Programme of CARDI in Guyana. From 2000 up until his retirement from the Institute in 2016, Dr. Simpson was stationed in Jamaica, where he functioned as the CARDI Representative and Natural Resource Management Specialist.

As the CARDI Representative, Dr. Simpson led the planning and oversaw the implementation of the Unit’s diverse research portfolio. As the Natural Resource Management Specialist, he pioneered the Institute’s Climate Change, Soil and Water and Agro-energy programmes. Dr. Simpson is credited for laying the foundation for the Institute’s very important Climate Change programme. His work in this area remains significant and impactful.

Among his many achievements were: assessing local varieties of local Castor bean varieties for their potential in biofuel production, rejuvenation of mined-out bauxite soils and the initiation of the Caribbean Agro-meteorology Initiative (CAMI) and Caribbean Track of Agriculture Component of the Pilot Programme for Climate Resilience (PPCR) projects.

Leslie always exemplified a collaborative and calm nature, humility and professionalism, not just as a scientist but as a person. His warm smile and hearty laugh, made him very approachable. He was a patriotic Guyanese, who will be remembered for his many attempts to get his Jamaican colleagues to acquire a taste for black pudding and pepper pot.

Dr. Simpson was the author of several publications and a mentor to many students. His balanced life included committed service to society

The management and staff extend, heartfelt condolences to his family and friends. May he rest in eternal peace and light perpetual shine on him 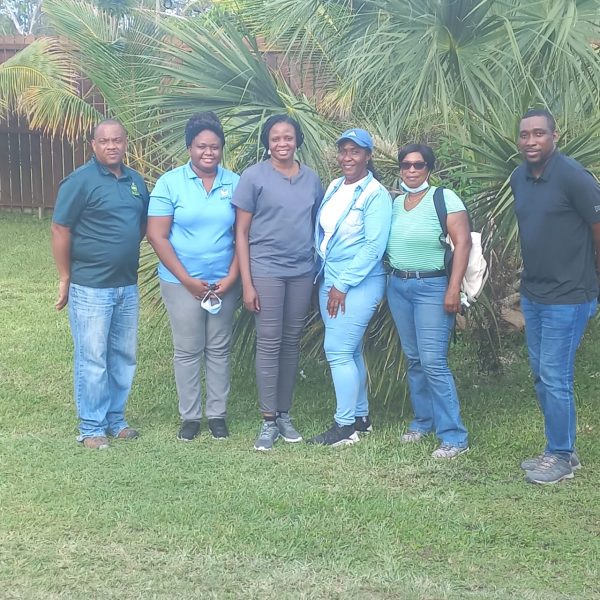 Considered as one of the most devastating threats, to one of the most nutritious root crop there is to offer, the sweet potato weevil has always been a menace to the farming society both regionally and internationally. Gnawing its way through the continents of America, Africa and Asia. Though its origins as to whether it hails from the deepest parts of Africa or India is still much unclear. There is however, one thing that remains a constant, and that is the invasive and destructive nature of this ravenous, nuisance, that has the ability to cause damage to sweet potato tubers – whether in the field or in storage.

Some of the integrated pest management (IPM) strategies introduced to farmers included: the use of clean planting material, treating planting material with an approved insecticide prior to planting, practicing good field sanitation such as the removal and proper disposal of crop residues and unharvested tubers, practicing crop rotation, harvesting the crop at maturity, use of pheromone traps and the use of approved pesticides.

The damage done by the sweet potato weevil is immense, as its larvae alters the look and edibility of the tuber as it borrows through, feeding on vines and tubers riddling it with darkened scars and faecal matter. Heavy infestation can lead to losses upwards of 90% as the weevil spends its entire life cycle on the host plant.

Past research conducted by CARDI, has shown that a combination of tactics have proven to be highly effective for controlling the pest.

As a follow up to this activity, the Institute will organize a series of trainings on sweet potato production, IPM and post-harvest technologies for farmers and agro processors.

After a two-year hiatus due to the COVID-19 pandemic, CARDI headed back to the Denbigh showgrounds in May Pen, Clarendon, Jamaica for the 68th Annual Denbigh Agricultural, Industrial and Food Show. The show was held from 30th July to 1st August, 2022, under the theme “Grow what we eat, eat what we grow.”

The staging of this event, coincided with Jamaica’s 60th year of Independence, and Diamond Jubilee celebrations. In recognition of this, CARDI Jamaica, mounted a display draped in the national colours, and featured the activities in its Value Chain Services Programme. The activities spearheaded by CARDI Jamaica, under Phase 2 of the EU ACP-funded coconut project, as well as achievements under the recently concluded IDB-funded, Pilot Programme for Climate Resilience (PPCR), were highlighted.

In light of the emergent issues of supply chain disruptions, and increased cost of fertilizers and animal feed globally, emphasis was placed on showcasing alternative animal feed formulations, using locally available forage ingredients and composting. Production of compost (vermicompost and stock and pile methods), were displayed in the booth. CARDI also presented on, CARDI Jamaica participates in the 68th Annual Denbigh Show “Guidelines for maintaining healthy composts” at various seminars.

Six animals from the Institute, were entered in various small ruminant competitions. The Institute copped three prizes: two second places in the ‘Dorper ram 2 years and over’, and the ‘Ewe Lambs, 1 year and under’ categories, and third place in the category ‘Dorper Ewe 1 year/under 2 years’.

CARDI Representative, Mrs. Dionne Clarke-Harris attended the official ceremonies. Minister of Agriculture, the Hon. Pearnel Charles Jnr, in his address underscored the need for greater efficiency through the application of technology. Calling for Jamaica to move towards ‘Food Freedom’, Prime Minister, Andrew Holness launched the Grow Smart…Eat Smart campaign. The campaign seeks to promote a holistic approach to food and nutrition security, through a focus on areas of crop production, climate[1]smart practices and technologies, access to finance, and advancing and expanding insurance for farmers with a strong focus on praedial larceny. 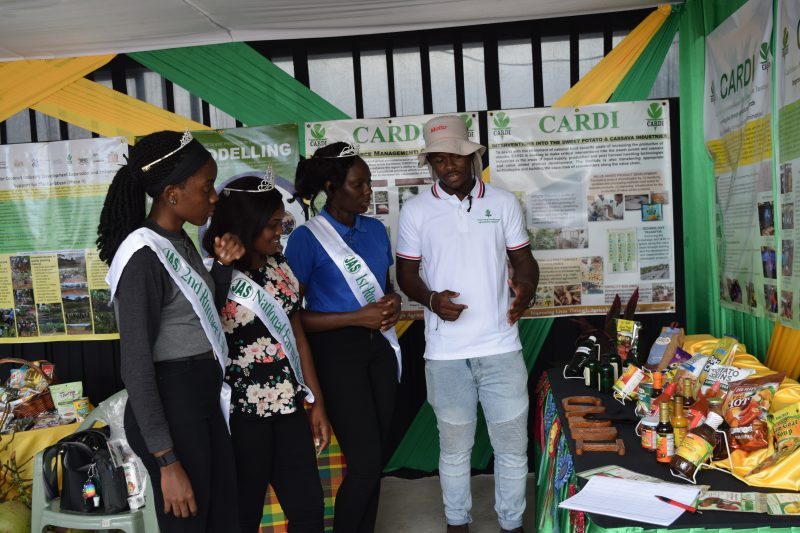