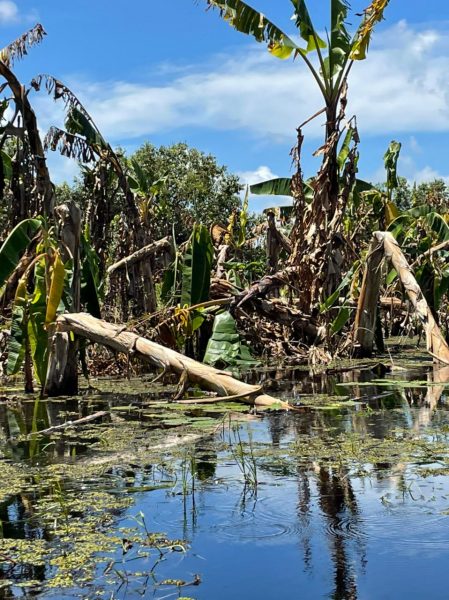 Since May up to early June, extreme rainfall associated with the Intertropical Convergence Zone (ITCZ) and low-level troughs has been affecting Northern and Southern Guyana, resulting in unprecedented flooding. On June 10, 2021, the President of Guyana, His Excellency Dr Irfaan Ali, declared a disaster as a result of flooding. Regions 2 (Pomeroon- Supernaam), 5 (Mahaica-Berbice), 6 (East Berbice-Corentyne), 7 (Cuyuni-Mazaruni) and 10 (Upper Demerara-Upper Berbice), were reported to be most impacted by this natural disaster. At the time of the President’s declaration, more than 28,000 households were affected and farmlands inundated by flooding.

The Caribbean Disaster Emergency Management Agency (CDEMA), through the Regional Response Mechanism (RRM), came to the aid of Guyana by mobilizing regional and international agencies to participate in the Detailed Damage Sectoral Assessment (DDSA) and recovery efforts. Five DDSA teams were officially deployed to Guyana to report on the flooding impacts on sectors in the areas of health, mining, agriculture, infrastructure, housing, water, sanitation, shelters and the social sector. The deployment of the DDSA teams was funded by USAID Eastern and Southern Caribbean through the Caribbean Climate Resilience Initiative.

Significant production of coconuts, rice, short term vegetables, root crops and cattle rearing takes place in the impacted Regions. Preliminary findings reveal widespread destruction of crops, animal housing and loss of livestock. The impact will have severe economic ramifications for many farm families who are dependent on agriculture as an income earner and a source of livelihood.

At the time of this report, the assessments were ongoing. Detailed findings will be published in a forthcoming issue of the Ministers’ Brief. CARDI will continue to support the rebuilding of the agriculture sector in the impacted Regions.