On 14 September, CARDI Senior Technician based in Antigua and Barbuda Bradbury Browne hosted a webinar on ‘Efficient low cost irrigation and water saving techniques for increased production’. This was the 2nd webinar under the Caribbean Climate Responsive Agriculture Forum organized by the, InterAmerican Institute for Cooperation on Agriculture (IICA).

Over the last few years, countries across the Region have been experiencing varying degrees of water stress, which have negatively impacted agriculture production. As one of the largest using sectors of freshwater, it is important that farmers improve their overall water use efficiency, so agriculture’s impact on freshwater resources is reduced, and the sector’s resilience to water risks improved.

Mr. Browne also discussed the importance of a field plan, irrigation scheduling and the setting up of a water harvesting system. Throughout the session, Mr. Browne shared his vast practical experience of setting up drip irrigation systems for a variety of commercial crops in Antigua and Barbuda, and gave insights on how mulching and cover crops can effectively complement such a system.

Noting the relatively high input costs required to set up such a system, the webinar also introduced participants to some low cost options. These included recycled bottles utilizing a wick system for vegetable production, clay pots and recycled bottles for sub surface irrigation.

The webinar was attended by over 400 participants from 18 countries. The feedback was positive with many noting that it was a very informative session which provided information that can be immediately used to improve their water usage.

In closing, Mr. Browne noted that rainfall is predicted to decrease across the Region further exacerbating water stress conditions in some countries. He noted that this together with the concurrent depletion of aquifers, saline water intrusion and ground water pollution can spell disaster for countries. ‘Now is the time to commit to adopting sustainable water use management practices in Caribbean agriculture’, he concluded. 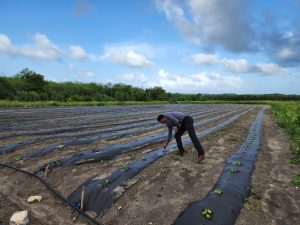