Two dasheen cultivars introduced by the Caribbean Agricultural Research and Development Institute (CARDI), are being widely adopted by farmers in St Vincent and the Grenadines, because of their superior agronomic characteristics. A recent study conducted by the Ministry of Agriculture, Forestry, Fisheries, Rural Transformation, Industry and Labour revealed that farmers in Agricultural Region 2, were opting to grow the introduced, Samoa (green petiole) and IND 512 (red petiole) varieties over the traditional ones.

The findings of the survey revealed that both varieties are highly adaptable to the region’s climatic and soil conditions. Additionally, farmers reported that the yields were higher than those obtained from traditional varieties. Both varieties were also found to be less susceptible to pests, and diseases such as aphid, mealy bug, mould and phytophthora. Tubers were also found to be less starchy, and as a result the cooking times were significantly lessened. In terms of propagation, farmers reported that it was easier, to remove suckers without causing damage to the mother plants

Both the Samoa and IND 512 were among 25 cultivars, evaluated on farms and on station, in St Vincent and the Grenadines between 2010 and 2014. They were part of the fifty cultivars initially obtained from the Secretariat of the Pacific Community (SPC) and Centre for Pacific Crops and Trees (CePaCT), under the European Union supported, International Network for Edible Aroids (INEA) project – Adapting clonally propagated crops to climatic and commercial change. The project’s objectives were to broaden the narrow genetic base of taro (dasheen), a major export crop, so that it can adapt to the changing climatic conditions and select varieties that have outstanding agronomic, yield and nutritional potential.

INEA is a consortium of scientists and growers from all over the world who are using edible aroids (taros), as a model to improve clonally propagated crops of the tropics. CARDI was one of the research organisations in this network and conducted the taro evaluations in St Vincent and St Lucia. 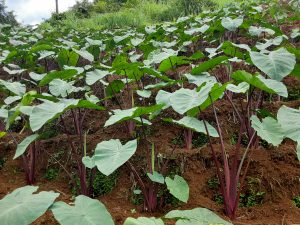