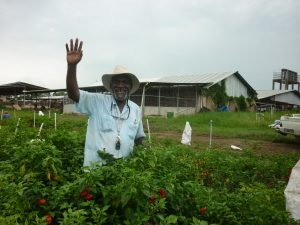 We are saddened to report on the loss of CARDI stalwart, Mr Herman Adams who passed away on 15th November 2022 in his home country of Guyana.

Mr. Adams was CARDI’s foremost Plant Breeder and Geneticist, who is credited for the development of several hot pepper varieties such as the West Indies Red, Moruga Red, Scorpion, Hood and CARDI Green. Today, most of these varieties remain in high demand by farmers and processors across the Region. At one time the Scorpion pepper was the hottest variety available on the market, with a reading of more than 2 million Scoville heat units.

Herman joined CARDI in 1980 as the Country Team Leader in Dominica. He subsequently worked in St Vincent and the Grenadines, Guyana and Barbados on major projects such as the: Small Farm Multiple Cropping Research Project, Increased production of Aroids and Arrowroot in the Eastern Caribbean and Low Fertility Soils in the Intermediate Savannahs. In the early 2000s he transferred to Trinidad and Tobago, where he primarily worked on hot pepper breeding and production, up until his retirement from the Institute in 2016. Herman also worked in Plant Genetic Resources Management and biodiversity conservation, and was the Regional Coordinator for the Caribbean Plant Genetic Resources Network (CAPGERNet).

Mr. Adams earned his BSc in Agronomy and MSc in Genetics and Plant Breeding from the Faculty of Agriculture, University of Belgrade. His enthusiasm for Science and research and his passion for hot pepper breeding were evident to everyone around him. He connected quite easily with researchers and farmers alike and shared his knowledge and experience willingly. Along the way he not only mentored numerous young scientists, but also took on the role of a father figure to many.

Mr. Adams was a brilliant, humble and pleasant person. Professionally, Herman has left an indelible mark on the Region’s agriculture sector and will be remembered for the significant contribution he made to the development of the hot pepper industry. Personally, he will be remembered for; being a supportive friend, his captivating stories, wittiness and wicked sense of humour.

We thank him for his sterling contribution to the Institute and the Region.

The management and staff extend heartfelt condolences to his family and friends.

Celebrating a coconut ‘farm to fork’ alliance in Barbados