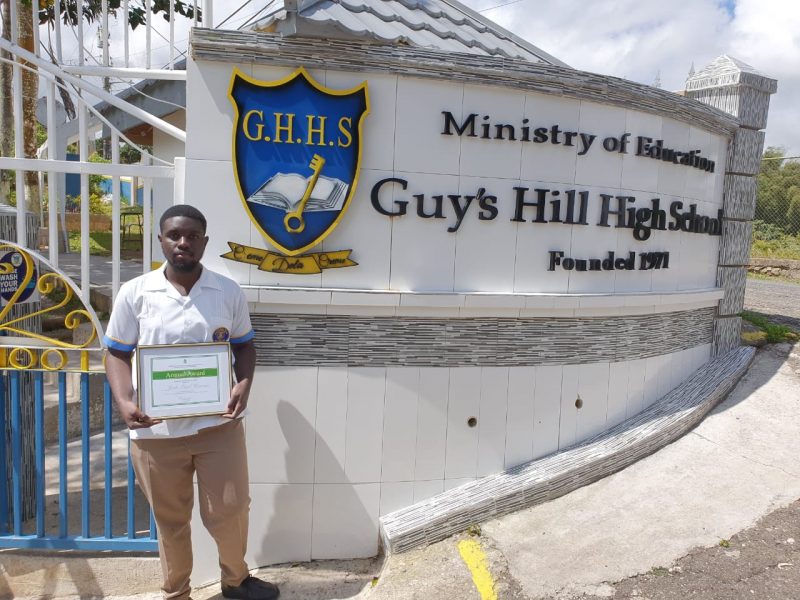 Josh-Oneil Hemans, of Guy’s Hill High School in Jamaica, was awarded the CARDI sponsored prize for the best 2019 CSEC Agricultural Science (Double Award, DA) student. The CARDI award was established in 2017, in collaboration with CXC, to honour the Region’s top achieving Agricultural Science student at the CSEC level. Due to the ongoing COVID-19 pandemic, Josh-Oneil only received his prize from Country Representative, Dionne Clarke-Harris earlier this year.

With the love and support from his family, school staff and church members, who continuously encouraged and motivated him, Josh-Oneil pursued twelve subjects at the CSEC level. Although he wishes to attend the University of the West Indies to study medicine, Josh-Oneil noted that he is passionate about agriculture and thus chose to study it alongside his other subjects. He recognizes the importance of agriculture and acknowledges that more emphasis should be placed on the sector as he believes that the region’s productivity is linked to its economic development.

Given the ongoing pandemic, however, he believes that attitudes towards agriculture have shifted. For example, in his community in Jamaica, he has seen an increase in backyard farms and gardens and more persons becoming health conscious and producing and consuming more locally-grown produce. At his home, with the help of his family, Josh-Oneil has successfully planted tomatoes, sweet peppers, lettuce and pakchoi. They often enjoy these as family meals and share with friends.

“Agriculture in the Caribbean is relegated mostly to subsistence farming. It should be seen as more than just planting a few crops and raising some chickens.” According to Josh-Oneil, more work must be done in the industry to attract young persons. He thinks that by diversifying agricultural programmes at tertiary institutions, young persons will gravitate towards that area of study.

The Institute will continue to champion the involvement of youth in the sector.

In Issue 4 [April 2021] of the Ministers’ Brief, in the article “Rewarding youth in Agriculture” it was incorrectly stated that the CARDI Award was established in 2017. We wish to apologize for this error.