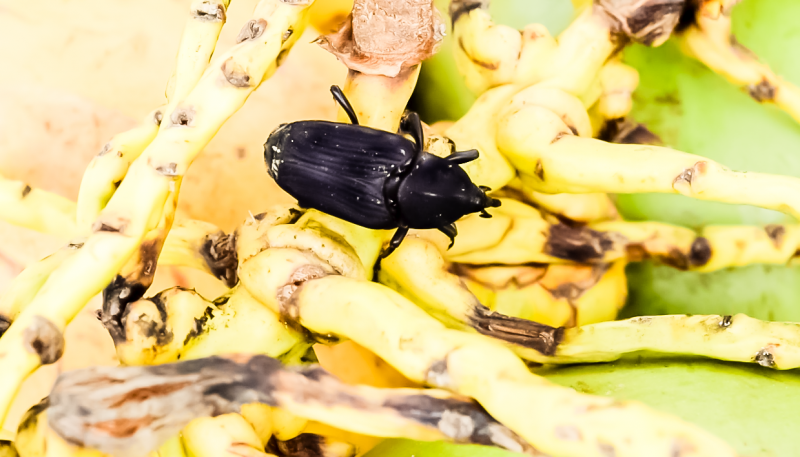 Through the European Union (EU)/CARIFORUM financed – Coconut Industry Development and Enhancement Support for the Caribbean project, The Caribbean Agricultural Research and Development Institute (CARDI) collaborated with the Research Division, Ministry of Agriculture, Lands and Fisheries (MALF) to validate and demonstrate improvements to the Ryncholure pheromone trapping technology for South American Palm Weevil (SAPW) Rynchophorous palmarum. The SAPW is the main vector of the Red Ring disease, with 35% mortality reported in coconut fields during the first 3- 10 years in Trinidad and Tobago. Trees infected with Red Ring usually start in the tips of older leaves which turn yellow to bronze then to reddish-brown and eventually fall. The trunk of the tree produces a fermented smell and the tree wilts and dies within three months of infection. When a cross-section of the trunk is cut, a symptomatic red ring band appears. While Ryncholure pheromone technology is not new to Trinidad, farmers have had low adoption rates for managing the SAPW, with many discontinuing its use over the years.

CARDI and MALF worked together to validate three improved technologies which have been recently researched in Latin America and found to increase the trapping of SAPW. These include: an improved trap design; the use of a synergist- ethyl acetate called Rynchomagnet combined with the Ryncholure pheromone and the positioning of traps in the field.

The improved design is a funnel-shaped trap that reduces the escape of the weevils and removes the need for using insecticide. The funnel traps are constructed from two used 1-gallon water bottles, one of which is inverted into another or alternatively using a 5-gallon bucket with a funnel inverted through the cover of the bucket. Traditional pheromone traps currently used by farmers require insecticides to prevent the escape of the weevils.

During the pre-test phase from September 2021 through November 2021, 20 coconut farmers received technical assistance from CARDI to set up and maintain the use of funnel traps on-farm and also advised on field sanitation practices. To successfully manage Red Ring disease, it is recommended that farmers practice a combination of trapping the SAPW and field sanitation.

Following the pre-test, a commercial multiple farm trial over four major coconut growing areas in southwest, east, central and south Trinidad, was executed from December 2021 to March 2022. Fifty-four funnel traps were set on 14 farms and monitored over a 16 week period. The traps were set in a randomized design, with each farm having at least three treatments covering a total area of 135 acres. CARDI Trinidad and Tobago Unit’s staff and the Entomology Unit at MALF jointly designed the experiment, constructed funnel traps and collected the field data. In addition, the Entomology Unit processed weevils weekly and CARDI’s Biometrician conducted the data analysis.

After 16 weeks, 12,065 adult weevils were trapped. One adult weevil has the potential to infect one coconut tree with the nematode Bursaphelenchus cocophilus which causes the Red Ring disease. From the data analysis, the treatment comprising of Ryncholure pheromone combined with the ethyl acetate synergist (Rynchomagnet) and sugar cane was more efficient, trapping the most number of weevils, 11% (456) weevils more than the traditional farmer treatments of Ryncholure pheromone combined with sugar cane and molasses. The ethyl acetate treatment combined with the pheromone and sugarcane was also found to increase the trapping of more female weevils by 8% (195) more female weevils than the farmers’ practice. Trapping of more female weevils would reduce the population of adult weevils in coconut plantations overtime at a faster rate. The traps positioned on the ground were found to trap 21% (864) more weevils than the traditional traps placed 1.5 meters above the ground.

This synergistic effect of Rynchomagnet (ethyl acetate) in the funnel trap has also been found to decrease the SAPW population at a faster rate of 6.58 weevils per week, when compared to the farmer practice of sugar cane, molasses, Ryncholure pheromone and insecticide, which was only able to reduce the weevil population by 0.8 weevils per week.

The results obtained under the project are that farmers can now utilize the Rynchomagnet (ethyl acetate) synergist combined with the Ryncholure pheromone technology thereby replacing the use of insecticides and molasses in the pheromone traps, resulting in lower treatment costs and providing an environmentally safer management practice. This tool can also be used to increase the trapping of weevils and also reduce the population levels at a faster rate compared to the traditional farmers’ practice.

The next phase of this collaboration, between CARDI and MALF, would commence in June through November 2022 and would involve mass trapping of adult SAPW on 80 coconut farms in Trinidad and 10 farms in Tobago, to demonstrate the improved results from the funnel trap design combined with the synergist effect of Rynchomagnet (ethyl acetate) and other field sanitation and integrated pest management practices for reducing SAPW infestation of coconut trees.

This EU Coconut project is being co-implemented by CARDI and the International Trade Centre’s Alliances for Action. 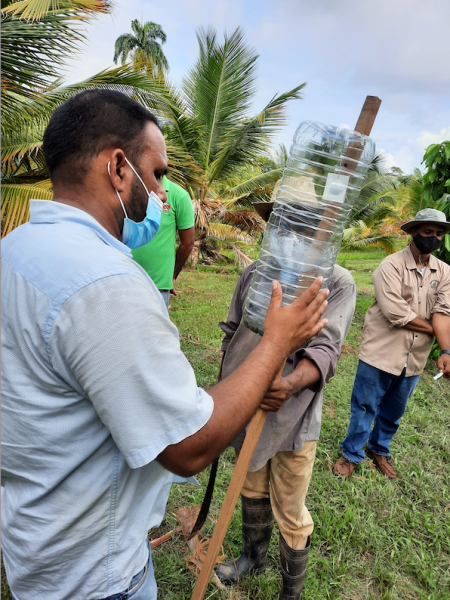 Restarting agriculture production in The Bahamas